Every rookie QB looked like a shiny new toy in shorts at rookie camp.

I think Feliepe Franks is a fun project player and going to be interesting when hitting is allowed in camp. He's athletic and can make some nice throws. Beat him out rook. It's doable and a good challenge to shine as an athlete as well as QB who must cut down on mistakes.

Mariota rarely makes mistakes in practice (Google if ya want for stories), leads well albeit a bit quiet, and is an athlete so he's a great next challenge for the rookie.

'We walked away impressed': How the Falcons decided on Desmond Ridder in the 2022 NFL Draft

Sports Illustrated's Daniel Flick believes "it seems like a matter of when, not if" Falcons QB Desmond Ridder gets to start.

Coach Arthur Smith didn't rule out Ridder earning the starting job in April's post-draft press conference. The rookie hasn't done anything to change that since OTAs. The Falcons are selling Marcus Mariota, who hasn't started since 2019, as a bridge to Ridder, the third-winningest quarterback in college history. Mariota owns a 29-32 record in seven seasons, was benched his only year with Smith in Tennessee, and has never played a full season in his career. Mariota's Smith ties have him ahead of Ridder entering training camp, but if Ridder outplays Mariota this preseason, he'll have a chance to start Week 1.

Two days....me totally paraphrasing because I don't feel like watching the videos again and it was a total setup-

Marcus is way ahead of others at QB, videos of him shared by team website, quotes about how he's such a good boy, Arthur discusses how he wants it more and came with the attitude he was hoping he'd have.

Ridder can make the throws, all the throws, and can make plays with his feet but what's most impressive is his intellect; not just smart but football smart. Been around and seen a lot of rookie QBs and he's light years ahead of where they were mentally.

What about Marcus? Didn't he go through camp not throwing an interception? (He did late)

Ridder is processing fast. He reads the shift and calls out the adjustments and ....I'm really impressed with how he's picking up the offense and adjusting to the speed of the game.

The number of INTs is not close and Marcus is way ahead. Marcus WRs mentioned are always the ones and most days Ridder's are either not mentioned or not the ones.

The two classy QBs comment on how well the other is doing which doesn't help but I can hear Marcus' influence in Ridder.

One day on Sirrius, they had Ridder showing his athleticism and making plays all over the field. Marcus seemed flat, made the throws but didn't run didn't roll out, not sure what was with Marcus that day.

Tate was quoted saying they were almost the same player.

If Ridder is getting backup work, Arthur can't hide it during camo with so many open practices. If he is the 1b then he must have plenty of passes to Pitts and London and even the backfield must include Patterson.

Bri said:
The number of INTs is not close and Marcus is way ahead
Click to expand...

I’d be fascinated to go back through training camps for every team that’s drafted a potential QB of the future and see if any coach has ever said, “he’s nowhere near as smart or capable as we thought. People should be mocking us with derisive scorn over our talent evaluation process.”

Like what did GMs/OCs say about Drunkenmauler, Leaf or others at OTAs?

I’m not saying Riddler isn’t all that and a bag of chips, but I have a hard time reading tea leaves over fluffy stuff like this, this early.

Training camp ~&gt; preseason will be a much better barometer of who’s where and whether Riddler has a chance to start.

I’m sure everyone in the falcons org would love to see it. But I’m also not surprised to hear any of them say they won’t “rule it out”. It’s such a noncommittal throw away statement.

The Atlanta #Falcons landed B/R's QB1 in this year's third round. It came a surprise, particularly to the young man. The Falcons need to take advantage of the fortuitous turn and see exactly what Desmond Ridder can do sooner rather than later.

...with only Marcus Mariota standing in Ridder's way, the Falcons should give Ridder every chance to emerge as the starter ...

...An NFL playbook hasn't been an insurmountable task for the Falcons rookie, though. Instead, he's adapted rather well from a mental standpoint...

..."I talked to a team who interviewed Ridder, who said that he had a plan outlined for how he was gonna beat out a veteran in a training camp setting and become a starter in this league Year 1," ...

Go to the link for the rest of the read.

The Athletic's Josh Kendall writes that "it sure sounds like third-round draft pick Desmond Ridder is going to make a competition" out of quarterback at training camp.

Arthur Smith has been impressed and complimentary of Ridder in OTAs and minicamp, and while we already knew that Ridder would likely be starting at some point, this could be a Russell Wilson-esque situation where he wins the job before anyone thought he would. "It won’t be surprising if Ridder takes over [Marcus] Mariota’s starting job at some point this season," Kendall writes.

Ridder was one of the last 2022 rookies to come to terms with his team, just as Falcons rookies report to training camp. Ridder would have to have a tremendous camp to overtake presumed starter Marcus Mariota, who has a history with Atlanta head coach Arthur Smith, though The Athletic's Josh Kendall said in June that it "sure sounds like" Ridder is going to make Mariota compete for the Week 1 gig. Ridder will play at some point in what will likely be another lost season for the woeful Falcons. He's worth drafting late in superflex leagues this summer.

No idea what to think here.
Click to expand...

Did he run as fast as the Riddler ran in Death Wish 3? Lol
C

He impressed me tonight overall. Those WRs he was passing to are garbage though. I lost count of the drops.
Z

I thought he looked pretty good. 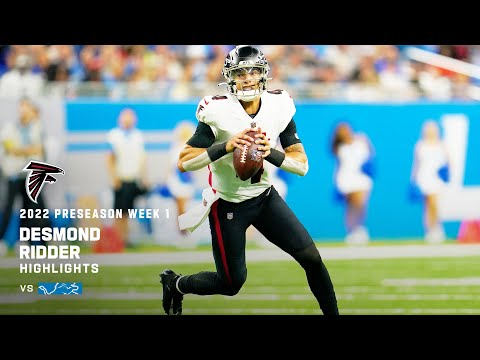 Every Ridder play. He looked great. His receivers were an embarrassment
B

Still think he's the most NFL ready QB.
I was ready to jump on him like the other rookies but...there wasn't much to complain of. Very impressive how he was under control and composed while the line is awful in your first NFL game.
The Falcons have a ton of WRs it seemed.
I like seeing the ol Lion making a comeback and Auden working off rust.

Ridder looked a lot like college. I'm anxious to see him against more 1s. Could definitely say he should be capable of beating backups.

Mariota looked good and the similarity in their games and running the offense was evident. Arthur's system on display.

Now they need the WRs to trust and be ready more. A lot of tight windows and the WR failed. Tons of routes did not involve getting their body in position too, just reaching.

Hesse looks like he'll stick which I wondered about. He's a future coach gem. Played QB and DL in college and then Vrabel switched him between DE and TE. I bet he's there to be a smart viewer for Pitts in the film room.

Batson is not fully back from injury. That little bugger is shockingly quick and he looked pretty ordinary. If he shows any quickness I bet he makes the team or is veteran signed, cut, signed all year. He's too quick so on a third down later in the season, he either eats up a top CB that should be covering a top WR or beats an injury fillin. Arthur learned this with Taywan Taylor years ago. It's a simple predictable trick. It doesn't matter if Batson gets ten catches on the year- it's who isn't covering a top target

Looked really good. That was impressive.

One exhibition in, Atlanta Falcons rookie Desmond Ridder is settling in as an NFL QB

What we've learned about Desmond Ridder through two preseason games

Falcons' Arthur Smith on tough love for QB Desmond Ridder: 'We're not waiting on him as a rookie'

Falcons QB Desmond Ridder completed 14-of-21 passes for 185 yards, one touchdown and two interceptions in Saturday's preseason game against the Jaguars.​

Playing against mostly backups, Ridder saw his first start of the preseason for Atlanta. On his first, Ridder faced pressure up the middle and immediately threw an interception to Jacksonville's Daniel Thomas. He would rebound later in the first quarter when he capped a 73-yard drive with a two-yard touchdown pass to rookie running back Tyler Allgeier in what would be his only touchdown pass of the day. Ridder now looks to take his place as Marcus Mariota's backup to start the season but will likely see the field at some point this season. He's nothing more than a dynasty stash heading into Week 1 against the Saints.
Aug 27, 2022, 6:08 PM ET
Click to expand...

The Falcons opened Week 1 with Marcus Mariota, who threw for 215 yards and rushed for 72 yards and a touchdown in a loss to New Orleans. Atlanta’s post-Ryan offense has looked quarterback friendly, with Mariota's 12 carries in Week 1 a glimpse at Ridder’s upside if/when they make the move to him. With no guaranteed money in 2023, Mariota’s leash is short if he’s not winning. How many losses it takes and whether the Falcons think they can flip the season with Ridder, the third-winningest quarterback in college history, is the question. A Week 2 matchup with the Rams has the Falcons (0-1) facing consecutive losses to start the year.
SOURCE: Atlanta Journal Constitution
Sep 16, 2022, 7:14 PM ET
Click to expand...

Lot of buzz that the Falcons may be making a change to Ridder after the bye. Arthur Smith on potential QB change: Everything is on the table - ProFootballTalk

The Falcons have a bye in Week 14 and head coach Arthur Smith isn’t saying that Marcus Mariota will be their quarterback when they return in Week 15.Smith has rebuffed questions about turning to rookie Desmond Ridder in the past, but he had a different tone after Sunday’s 19-16 loss to the...

profootballtalk.nbcsports.com
You must log in or register to reply here.

2022 NFL Draft: Projecting the 1st Round